For Amanda and me, the parenting journey began crazy young, with me in the lead at a whopping 20 years old, and her fresh out of high school at 18. We were babies raising babies. Newlyweds on a new journey. I was making a solid $1,100 per month running a pizza shop, driving a little two-seater truck that Amanda’s grandparents had sold me for next to nothing, living in a tiny one-bedroom apartment full of furniture that we had been given. By all accounts, the world would have looked at us and said we were not ready to be parents. And many of them straight up told us as much.

Fast forward 18 years and our firstborn just moved to Florida for her first big adventure of her own, and I couldn’t be more proud of her. Sure, I bawled my eyes out when we loaded the trailer up with her stuff and moved her into her first apartment. And that doesn’t even come close to the tears that came flooding when we returned home and left her behind, a few hundred miles away. But she was ready. She has become the most mature, wise, strong, independent young lady that I could have ever hoped for – and then some!

I don’t know, something about her being the age her mom was when we had her has me thinking a lot lately. What did I learn from having a child at such a young age? I recently wrote a book called The Art of Getting It Wrong, where I basically talk about an abnormally disproportionate chunk of ways I have messed up royally, and yet how even our greatest failures can become our biggest blessings. How do we learn from our mistakes?

Finding the ways my failures don’t define me - but refine me - is an art form I have been trying to get a hang of for a long time now. I’m still not great at it, but I’m working on it. It’s all about perspective. I want to get more out of my failures than I lost from them every time.

So, while I wouldn’t change a thing about Amanda and me having the most wonderful young lady in the world as our daughter (by no means would I call that a failure) – it does make me ponder the things I learned by becoming a dad at 20, when a lot of guys are out there thinking about college, career, partying, and video games. To name a few:

1. You’re never really ready. People are always worried they aren’t going to be ready. And not just to have their first child. There are a million things. Like getting married. Or adopting. Or taking that dive and pursuing a career you’re passionate about, but you might feel like you’re NOT ready for.

I’m 39 years old now and I can tell you, that I have had more than 6,000 things in my life that I have done that I didn’t feel ready for. And the truth is, it’s doing it that makes you ready. Sometimes it’s the jumping in, even when you aren’t ready, that grows your faith and forces you to get ready.

We started vlogging on YouTube as a family 3 years ago and I honestly wasn’t ready. I didn’t know how to make videos. I didn’t know what to edit. I didn’t have any gear. We were terrible on camera. It was rough. We weren’t ready. But we got ready as we went and now we get to make a living showing how a big, beautifully diverse, adoptive family of 9 does life.

2. Having children young doesn’t mean you don’t get to have an adventurous life. As crazy as it sounds, this never even entered our minds as a young couple. We were adventure-crazed, wanderlusting driven dreamers who were going to change the world. And having a baby was just going to be part of that plan like anything else!

And while having children together at such a young age definitely altered the way we pursued those dreams, it was also invigorating to get to figure out how to travel with babies, build a life with babies, hang out with friends with our babies, go out to eat with our babies, start businesses with babies, and do it all together. We never had a season of trying to do it without babies to compare it to. So to this day, I can’t even imagine doing it any other way!

3. I am way more selfish than I ever dreamed possible. Over the years, any time I came face-to-face with seeing fatherhood at a young age as anything less than amazing, I was really being confronted by my own selfishness, which is something I think we can all agree is a good thing. No one likes it when people are selfish. I don’t even like me when I’m selfish. And having kids young really expedited the process of realizing exactly how selfish I am, which, in turn, has given me ample opportunities to try and exchange that selfishness for something far better.

4. I have learned the importance of gratitude – and that my parents were freaking amazing. I think when you’re young, you really don’t fully grasp how incredible your parents truly are. Primarily because, as we established in point three, we are selfish. Or at least I was. I didn’t see all the hats they wore, plates they kept spinning, bills they paid, predicaments they found a way through, or the ways that they took care of me and my siblings. They did the best they could with the tools they had, and they absolutely rocked it. They weren’t perfect, but they were perfectly what I needed. All the ways I have struggled over the years as a dad and husband just paint a picture for me of how wonderful they truly were. I’m more grateful for them now than I ever have been.

5. My marriage is the most important relationship in my world, other than with God. More important than the kids. More important than the career. Keep the marriage strong because it’s supposed to still be standing when the kids move out, and when we retire. Not just surviving but thriving. So make your spouse your priority. This doesn’t happen by accident, even for those of us who don’t just love our spouses, but really truly like them and they’re our best friends. The craziness of life can really pull you apart and keep you from investing in your friendship. Don’t let it.

Yes, you need to be the hardest worker in the room. You’ll have plenty of time for that. Yes, there will be seasons you’ll need to pull more hours at your job. But make sure you get that weekly date night and turn off the phone while you do. Sure, the kids are going to have weeks where they have plenty of sports and science projects and birthday parties all at the same time. But find ways to do as much of it together as you can. Make her coffee in the morning before you leave for work. Massage her shoulders at night (and not for something in return). Tell her she looks gorgeous before she asks how she looks.

When you have kids as young as we did, there was a whole lot of paying dues and proving ourselves and the grind sometimes made it hard to connect consistently. And when I look back at the seasons that we made it happen, no matter what – those are the seasons that we thrived. And not just us – our kids too! Because one of the greatest gifts you can give your kids is a healthy marriage.

I know there are about a thousand more lessons “learned” if I had unlimited time to write, but I have six little wonders to make dinner for and one down in Florida to Facetime. So I guess the last thing I will say is this. Time flies. I know that everyone says that. But it really is like you blink and they’re all grown up.

Enjoy this moment. Whatever it is. If they’re in diapers — I know it sounds crazy — but enjoy it. If they’re learning to walk, you film that stuff and back up the file in as many places as you can so you can look back on it and bawl your eyes out on their 18th birthday. It goes by so much faster than you could have imagined.

Be present with them. If your daughter asks you to dance, by God, you better dance. If your son wants to throw the football, forget about the pain in your shoulder for a few minutes and ice it later. Do fun stuff together. A lot of it. Even the mundane stuff. And soak up every second.

Photo by Kelli McClintock on Unsplash 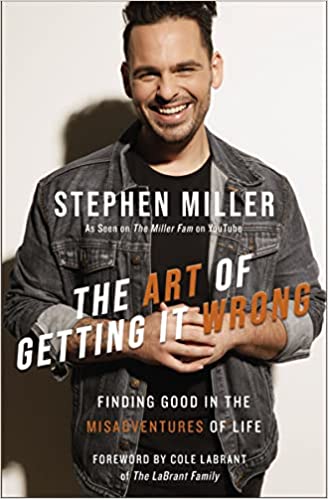 Stephen Miller is a creator and entrepreneur who has grown his platform to nearly one million followers in just two years through his show The Miller Fam, a channel that displays the beauty of diversity and adoption featuring his large, diverse, adoptive family of nine. No clickbait. No fake drama. Just a story that says, “Where grace guides, we'll go." With over fifteen years of ministry in some of the nation's largest churches, Stephen has recorded six studio albums and is the author of Liberating King and Worship Leaders, We Are Not Rock Stars. His new book, THE ART OF GETTING IT WRONG, is available wherever books are sold.

This content first appeared on Crosswalk.com and is used here with permission. To view the original visit: https://www.crosswalk.com/family/parenting/what-i-learned-becoming-a-dad-at-20.html